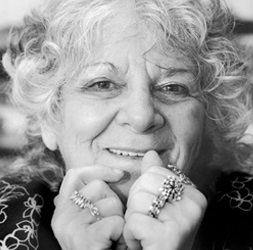 If proteins are the ‘building blocks’ of life, then ribosomes are the factories that produce them. They are large, complex particles within each cell that translate the genetic information into tens of thousands of proteins, each with a specific task to perform within the body. Owing to the fundamental role of ribosomes, many antibiotics target them. Understanding their structure and function can help biochemists develop new antibiotics to disrupt bacterial ribosomes and fight bacterial drug resistance.

The 2009 Nobel Prize in Chemistry was shared between three scientists, Venkatraman Ramakrishnan, Thomas A. Steitz and Ada E. Yonath, each of whom has contributed to our knowledge of the “…structure and function of the ribosome”.

All three published papers based on data collected at various synchrotrons, including DESY, where Yonath led a research group of the Max Planck in addition to her activities at the Weizmann Institute in Israel.
Using x-ray crystallography, the two teams of Yonath and Ramakrishnan calculated the atomic structure of the small ribosomal subunit known as 30S, from the bacterium Thermus thermophilus, while other researchers (including Steitz) reported on the larger 50S subunit from the bacterium Haloarcula marismortui. The process involves firing x-rays at the target crystals of the studies compound, in this case ribosomes, and then working back from the angle of diffracted rays to calculate the atomic structure of the microscopic target by mapping the position for every atom. The ribosome is the largest and most complex component of a cell that has been studied in this way.

For Yonath, the award is the culmination of decades of pioneering work - in 1970 she established Israel’s first protein crystallography laboratory and in 1979 pioneered the crystallization of ribosomal particles; a task considered formidable at that time. Twenty years later, by determining the structures of both ribosomal subunits from eubacteria that serve as pathogen models, she has elucidated the actions of several antibiotics targeting the ribosome.

Ada Yonath was born in Jerusalem in 1939 to Zionist immigrants. After her father, a grocer and rabbi, died, the family moved to Tel Aviv where Ada attended Tichon Hadash High School. After military service, she entered the Hebrew University of Jerusalem, receiving a BS in chemistry in 1962 and an MS in biochemistry in 1964 before earning a PhD in X-Ray crystallography in 1968 at the Weizmann Institute of Science in Rehovot. Moving to America, Yonath worked at the Carnegie Mellon University and MIT together with F.A. Cotton. From 1979-84 she was a group leader at the Max Planck Institute for Molecular Genetics in Berlin and headed their research unit in Hamburg from 1986–2004 as well as the Mazar Center of Structural Biology (1988-2004).

She has been a professor at the Weizmann Institute since 1988, heading the Kimmelman Center for Biomolecular Structure and Assembly since 1989. She has also served as visiting professor at the University of Chicago. She is a member of the US National Academy, the Israel Academy and several European Academies (France, German, Italian, Spain, UK).

Yonath has received several awards, including the first European Crystallography Prize in 2000, the Israel Prize for chemistry in 2002 and shared the Wolf Prize in Chemistry with George Feher.

Exhibition "Sketches of Science" by Volker Stege - Locations and Dates 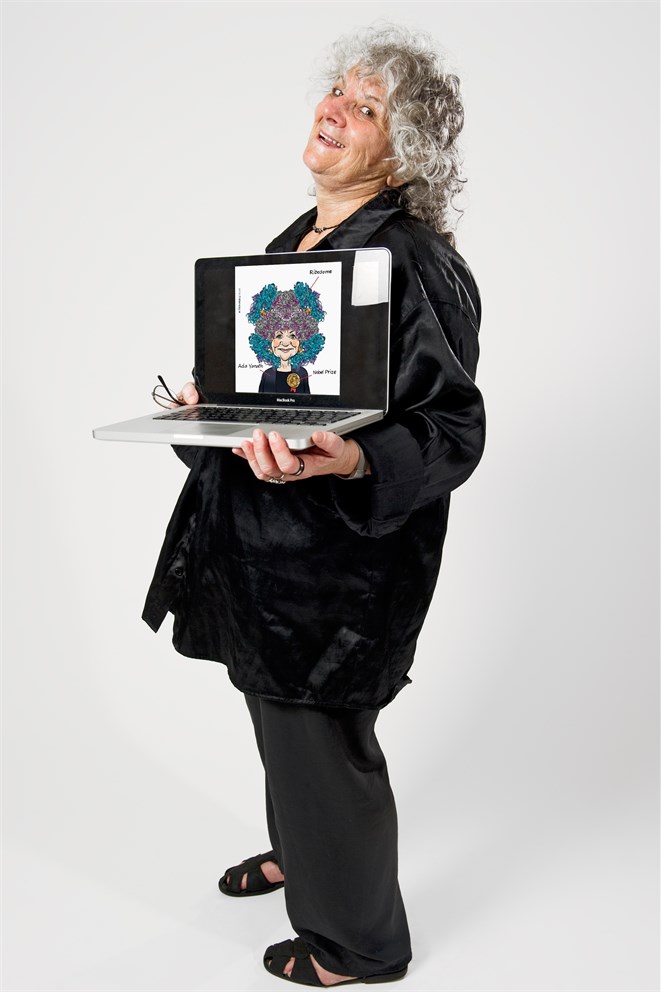 Ada Yonath likes drawings. But she doesn't like to draw! „Naaah, nooo!“
Out comes her laptop and pictures of her she wants to be used instead of taking new ones:

A man dressed up as Ada Yonath for Purim, the Jewish version of carnival (!!!).
A girl posing as a ribosome, a tiny organell of the cell Yonath worked on (!!!) .

Then a caricature of herself: Nice one, let's go! We put the file on my computer (which has a bigger screen) and start what turns out to be a lively session, the kind that makes photographers love their jobs.
Later I notice the file of her caricature has remained on my computer. It's called „Rosh male ribosomeim“ or, as I find out, „Head full of Ribosomes“!