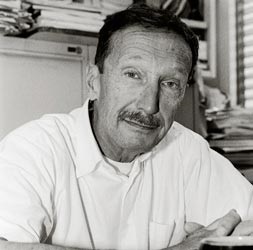 Rolf Martin Zinkernagel was born on 6 January 1944 in Riehen near Basel, Switzerland. He obtained an M.D. degree from the University of Basel in Switzerland, and earned a Ph.D. at the Australian National University in Canberra, Australia. After some clinical training, he worked on immune responses against infectious diseases first at the Institute of Biochemistry, University of Lausanne from 1970 – 72 under the direction of H. Isliker and learned about immunology and immune-chemistry as well has how frustrating experimental lab work can be. Subsequently from 1973 – 75, he went to the National University of Canberra, Australia and spent time in the lab studying immunity to infectious diseases.

From 1975 to 1979, he was at the Scripps Clinic and Research Foundation in La Jolla, California. He studied cellular immunity against virus infections that protects against infections but also damages host tissue and causes disease. In 1979, he came to the University of Zurich, Institute of Pathology, and headed the group of experimental pathology and experimental immunology. His group has made important contributions to our understanding of antibodies that protect against infections and control viruses not only during acute disease but also in chronic infections. From 1992 - 2008 he was head of the Institute of Experimental Immunology and is now professor emeritus.

It was in Canberra together with P.C. Doherty that he discovered how immune cells recognise virus infected and tumour cells. This work earned them the Nobel Prize in Medicine or Physiology in 1996 “for their discoveries concerning the specificity of the cell mediated immune defence".

He has been on the editorial board of 10 scientific journals, in review boards of international institutions and a member of several scientific associations and learned societies. In the past ten years, he has made efforts in furthering the public understanding of science, gene technology and of the need of animal experimentation in science and biomedical research. He advises a number of biomedical small upstart companies scientifically. 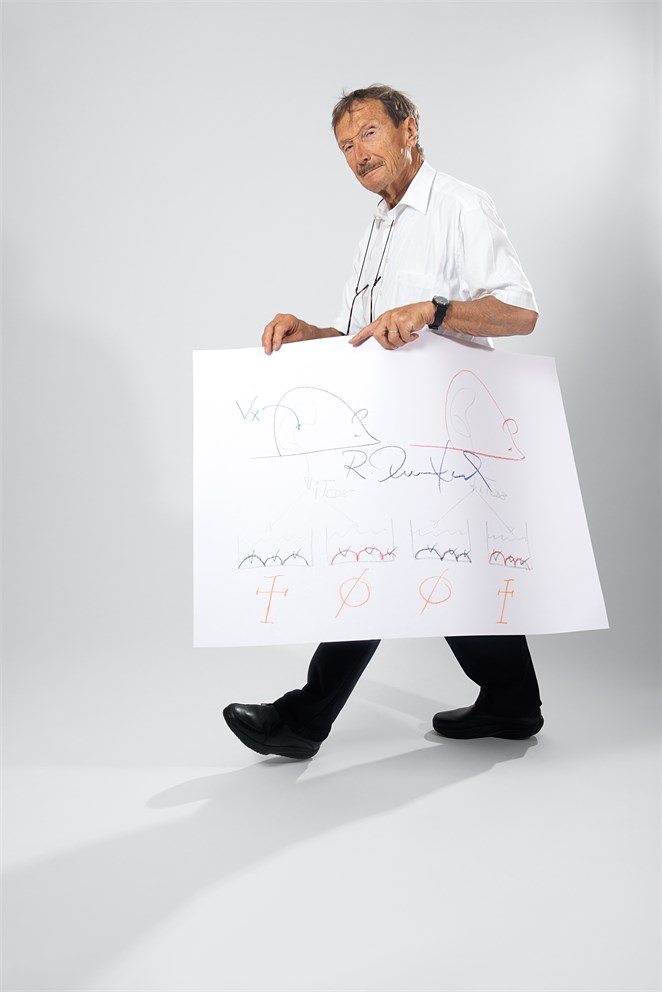 Rolf Zinkernagel with his "Sketch of Science"

These are classy mice – and special mice, too! After all, they helped win a Nobel Prize. Rolf Zinkernagel is a great sketcher.
When I ask him whether these mice were „knock-out“ mice engineered for genetic research, he smiles: „No, this was all done the old-fashioned way!“

In 1973, in Canberra, Australia, Rolf Zinkernagel and Peter Doherty performed an experiment that changed our view of how the immune system works and led to them being awarded, some 23 years later, the 1996 Nobel Prize in Physiology or Medicine. What Zinkernagel has drawn here is a summary of that experiment.

At the top are two kinds of inbred mice. One mouse is depicted in black, the other in red, and the colours stand for different strains of mice with different genetic backgrounds. Both mice were infected with a virus, illustrated with a green ‘Vx’. After eight days or so, immune cells, called cytotoxic T cells and indicated by the abbreviation ‘iTCD8+’, were taken from these infected mice to see whether they could recognise and kill virus-infected cells that had been grown in tissue culture. Towards the bottom of the picture those cultured cells, derived from either the ‘black’ or ‘red’ strains of mice, are shown in their plastic dishes, each with a green ‘V’ to show that it is an infected cell.

Below the dishes, a symbol shows the result of each test: a cross if the cells in the dish died, or a crossed zero if nothing happened. As can be seen, immune cells from the black mouse only destroyed cultured cells taken from black mice, and immune cells derived from the red mice only killed those taken from red mice. “Now this was an absolutely unexplained and unexpected result,” recalls Zinkernagel.

What the assay revealed was that, in order to do their job, the immune cells have to recognize not only the virus infection, but also something about the nature of the infected cells themselves. What they were recognising was found, in due course, to be transplantation antigens; products of a set of genes called the major histocompatibility complex (MHC), which turned out to be essential for exposing virus infected cells to immune system attack. Whether an infected cell gets eliminated therefore depends on whether it is of the right MHC type.

Zinkernagel’s drawing is strikingly clear. “Some people like to make PowerPoints by drawing everything according to the now standing rules of, you know, good graphics,” he says. “I always have preferred to do my PowerPoints in hand drawings, because I then can take the liberty of reducing the problems and the questions I want to ask, just to pinpoint down the essential message.“