The Origin of Biological Information 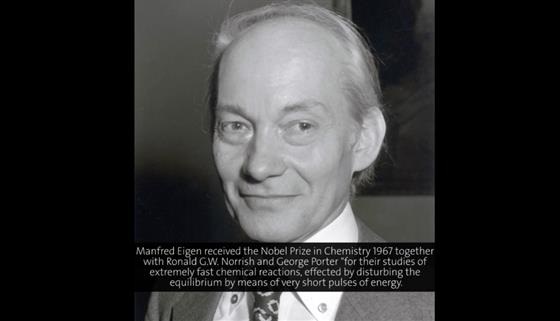 Manfred Eigen shared the 1967 Nobel Prize in Chemistry with the two British chemists Ronald Norrish and George Porter. Working at the interface of chemistry and physics, the three scientists had developed means of studying the time course of chemical reactions which take place on a nanosecond scale (a nanosecond is 0.0000001 % of a second). Such reactions were previously thought to be immeasurably fast. As is done by a rather small number of Nobel Laureates, in the years following upon the award, Eigen then turned his attention to a totally different field of interest. This is the field of evolutionary biology and the generation of biological information and these are also the subjects of the present lecture, which is the first lecture Eigen gave in Lindau. With the aid of some simple “games”, as Eigen calls them, he explains the basic principles of evolution. And since Eigen has to admit that his “games”, while highly insightful, are too repetitive and boring to be played by humans, he uses a computer for his demonstration. Remarkably, Eigen’s talk is clear enough to be easily followed even without a video recording of his computer experiments.The lecture begins with an introduction on the power of evolution with respect to the generation of biological information using the example of cytochrome c, a rather simple protein made of about 100 amino acids. If someone wanted to synthesize all the possible variants of such a 100 amino acid protein simultaneously, he would require more room and mass than available in our entire universe, Eigen points out. Or, if one would give a cell the task to synthesize all these variants sequentially, one after the other, this cell would be busy for much longer than there has been life on earth. So which properties of matter allow nature to make a protein as efficient as cytochrome c in such a targeted way, avoiding the necessity to try all variants? What are the molecular prerequisites of evolution? With the aid of his computer games, Eigen gives the answer to these questions. Evolution requires metabolism, self-reproduction and mutation. In this troika, self-reproduction is the mechanism that allows the “storage” of evolutionary successful biological information. The extent of information that can be stored in a biological system thus essentially depends on reproduction accuracy, Eigen explains. He furthermore introduces aspects of his own theory of the origin of life, the quasispecies and the hypercycle. From the 1990s on, the insight emanating from Eigen’s concepts found extensive application in the field of “directed evolution”. Here, proteins are “engineered” by mimicking evolution in a test tube. The products of such “directed evolution” experiments have found widespread application as biocatalysts for industrial processes.In his active research career, Manfred Eigen traversed the fields of chemistry, physics, medicine and biology with impressive vigour. Still, by no means do his talents end at the natural sciences. During some of the 19 Lindau meetings he participated in thus far, Eigen gave something rather different from scientific talks: piano concerts. By this virtue he belongs to the select few Nobel Laureates who have performed live music at a Lindau meeting. David Siegel