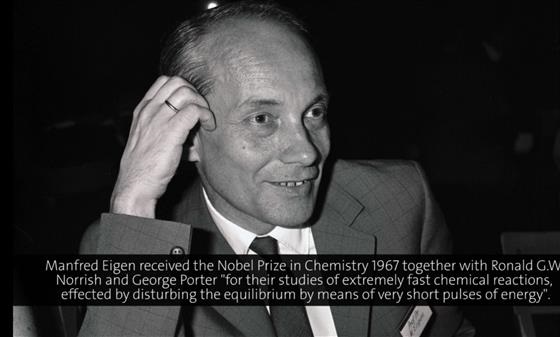 As a German Nobel Laureate, Manfred Eigen receives every year an invitation to the Lindau meetings. Over the years, he now and then has attended meetings in all three subjects, physics, chemistry and medicine, even though he has not lectured at all of them. The statistics of his participation seems to reflect his research interests, which in the beginning was more traditional physical chemistry and which later on gravitated towards biochemistry, self-organization, evolution and biotechnology. To receive the Nobel Prize, which Eigen did already in 1967, usually gives a scientist a unique possibility to choose her/his own research subject. There are several examples of this, one of the more spectacular when 1960 Nobel Laureate in Physics, Donald Glaser, switched from detecting high-energy particles to investigating the brain. Another physicist making a similar switch actually was on the speakers list just before Manfred Eigen. This was Brian Josephson, the brilliant student who received a Nobel Prize in 1973 for the discovery of the quantum mechanical effect named after him and who, in 1990, gave a talk on “Consciousness in science”. Eigen’s lecture is available both in his original German and in a simultaneous translation into English. One cannot but admire the translator who manages to follow Eigen’s far-reaching lecture, which moves from the Greek mythology and the story of Pandora’s box, over viruses like HIV and diseases such as AIDS, to genetic processes involving DNA and RNA. But as with all the Lindau meeting lectures that have been recorded on tape, listening to the original gives one a much stronger feeling of presence even if one doesn’t understand the language to perfection! Anders Bárány