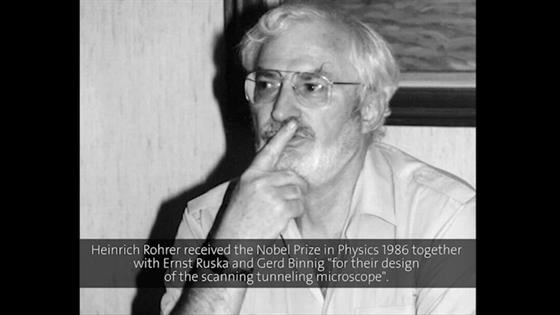 In 1986, the Nobel Prize in Physics rewarded two radical leaps in microscope technology that were made almost 50 years away from each other and finally allowed us to witness life at the atomic level. Heinrich Rohrer shared half of the prize with Gerd Binnig „for their design of the scanning tunneling microscope“. The other half of the prize was awarded to Ernst Ruska who had built the first electron microscope in 1933, the same year, in which Rohrer was born. Binnig and Rohrer had conducted their groundbreaking work not in academia but in industry, namely the IBM Research Laboratory in Zürich. Rohrer therefore was well aware that science had been driven off its ivory tower long time ago, „to find itself amidst a stress field of society, economy and politics, in which it is endangered to loose its identity“, as he states in this lecture. Yet „in all the years with IBM Research, I have especially appreciated the freedom to pursue the activities I found interesting“, he had recalled earlier[1] - and used this freedom thoroughly. „The reason for their success was the exceptional precision of the mechanical design“, the Royal Swedish Academy of Sciences praised Binnig’s and Rohrer’s achievement[2]. In this sense, this only lecture Heinrich Rohrer ever gave in Lindau is a plea both for the freedom of scientific creativity and for the scientist’s duty to place precision above pretension.Scientific progress often is neither predictable nor projectable, as Rohrer explains by way of example of the inventions of the three 1986 physics laureates. Both industry and politics therefore should not put too much pressure on science to be at their service. Science feeds upon a constant flux of unpredictable ideas, and scientific success stems from the courage to explore and the endurance to chart unknown territories rather than from fulfilling the expectations of industry managers, politicians or grant giving institutions. „We need a helping hand, not a regulating one.“Scientists, on the other hand, should break with some bad habits, Rohrer admonishes and sharply criticizes a „poor signal-to-noise ratio“. The rising flood of scientific papers is not proportional to the new knowledge it carries with it. It rather reflects the crisis of a system, in whose evaluation procedures quantity outweighs quality, and in which vanity rather than true novelty plays the key role: „The necessity to know has been replaced by the need to glitter.“ To be “first” and “novel” seems to be more important than to be truly innovative: “In their craving for recognition, scientists are more and more tempted to turn to the media, only to find their results distorted in blatant headlines.“ Yet not the journalists alone should be blamed for those headlines: „We play our cards according to the rules we define ourselves. If we had to read everything we write, we would write less.“ Rohrer also argues against an overemphasis of competition in current science. The ambition to be better than others may be acceptable, he says, but not the ambition to eliminate competitors. Accordant attempts absorb energy from science, distract scientists from their own genuine goals and block promising roads into the future. Finally, Rohrer reminds his audience of the foremost privilege of scientists: „We are those who may make a work out of their dreams and who are allowed to dream while working.“ In 2012, the year before he died, he revived this formulation in a lecture entitled “Five wishes for young scientists” in Stockholm: „My final wish is that you will belong to those scientists who are paid for what they are doing and not those who do what they are paid for. Then you forge the future with your visions, passion, and devotion and the presence simply fades away.“

[3] As a legacy of Heinrich Rohrer, this lecture is documented in the Annual Report 2013 of the Lindau Nobel Laureate Meetings on page 23.