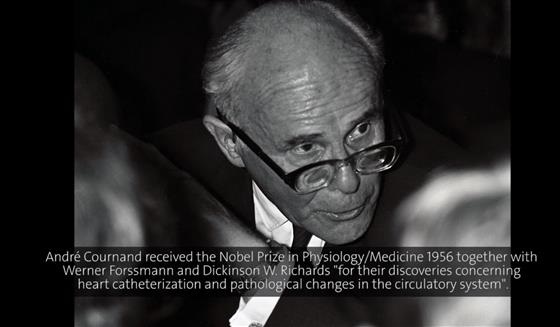 André Cournand was born in Paris almost precisely two months before Alfred Nobel had his famous will signed at the Swedish-Norwegian Club there. As is well known today, the will formulates a general “umbrella” statement for the five prizes, namely “to those who, during the preceding year, shall have conferred the greatest benefit on mankind”. With Cournand, there is no problem to see that the second part of this sentence is fulfilled, since the method of catheterization of the heart certainly has saved many lives. Cournand lectured at Lindau six times and even though he participated in 1984, the present lecture is his last. It is quite interesting to see that he did not stick with the fascinating success story of heart catheterization, a story which certainly could have inspired the young researchers and students at each one of the meetings. Instead his choice of topics was much broader and in 1981, the year of his last lecture at Lindau, at age 85, he read a short text on science, scientists and society. It seems that after his retirement, Cournand had become interested in the work of the French futurist and philosopher Gaston Berger (1896-1960), and he combines this interest with his own long experience and general interest in the conduct and method of science. Although he states that his lecture is mainly for the young people, Cournand has written a text that probably went over the head of many of the young researchers and students in the audience. He refers to both Thomas Kuhn and Michael Polanyi and tells the story of the scientific paradigm shift from Newtonian mechanics to the quantum theory of Max Planck and Albert Einstein. Although the text is read in English, sometimes he returns to his mother language and several times uses the French word “savant”. Whether this is a slip of mind or a careful reminder that he believes that a scientist should be more than a researcher, is an unanswered question! Anders Bárány