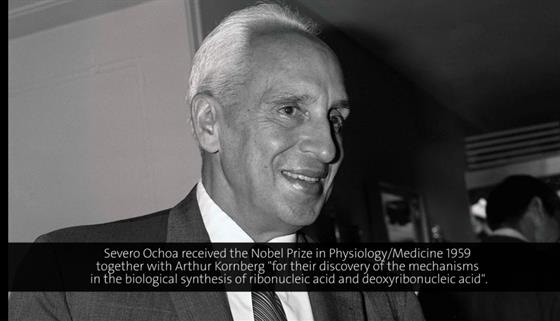 Severo Ochoa was a Spanish biochemist. One of the many stations on his international career was Berlin, where he worked under Otto Meyerhof, recipient of one of the 1922 Nobel Prizes in Physiology or Medicine, from 1929 to 1930. During this period, Ochoa learned German. And, although not having lived in a German speaking country for almost 50 years, he decided to re-activate his knowledge for the present lecture. Ochoa’s Lindau lectures are generally concerned with three major themes: the genetic code, cancer and the regulation of protein synthesis. The first topic is linked to the work that gained Ochoa the 1959 Nobel Prize in Physiology or Medicine. Together with Arthur Kornberg, he had elucidated the basic biochemical mechanisms of RNA and DNA synthesis. The latter two topics gained importance in his later career, which inter alia brought him to the Roche Institute of Molecular Biology in Nutley, New Jersey, where he worked from 1974 to 1985.The present lecture deals, in a rather technical fashion, with some recent and on-going experiments done at the Roche Institute. These experiments all fall into the domain of the regulation of protein synthesis. After introducing his collaborators first (which is rather unusual in scientific presentations), Ochoa talks about eIF2. eIF2 is a so-called initiation factor, which is required for intracellular protein synthesis to commence. eIF2 is furthermore a protein itself. At the Roche Institute, different aspects of eIF2 biochemistry were studied using reticulocytes, “immature” red blood cells. In these cells (and others), eIF2 may be deactivated by phosphorylation, which is accomplished by enzymes called protein kinases. The cell uses this regulation mechanism if the available nutrients are not sufficient for protein synthesis, for example. In great technical detail Ochoa discusses the properties of eIF2, the eIF2 kinases and the effects of inhibitors such as haemin on the regulatory mechanisms. In his next Lindau lecture, which he gave three years later, in 1981, he should elaborate further on these issues, again in German.After ending his work at the Roche Institute, Ochoa returned to Spain, where he lived until his death in 1993. From 1963 to 1990, he participated in ten Lindau Meetings. David Siegel