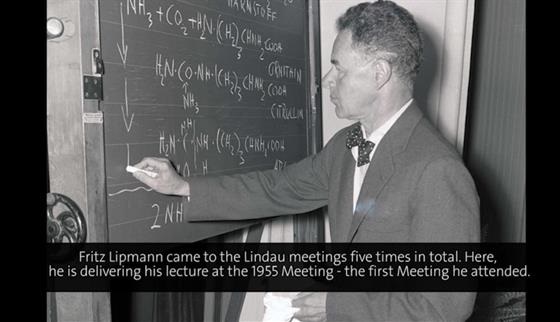 Biosynthesis is a prerequisite of life. It forms highly ordered and energy-rich molecules. According to the second law of thermodynamics, however, chemical reactions can only proceed spontaneously if they release energy and increase the disorder of the universe. For biosynthetic reactions to occur, it is therefore necessary to directly couple them with entropy-increasing reactions. A part of the energy that is released in the latter, can then be used to drive the former. This coupling is achieved through enzymes. Yet they can’t fulfill this task alone. They need the help of activated carrier molecules, historically known as coenzymes. Fritz Lipmann’s research was decisive in understanding their function. Coenzymes store the energy that our organism gains from the digestion of food in chemical bonds. By releasing this energy again, they can both enable energetically unfavorable biosynthetic reactions and act as a donor of chemical groups. They are „like money to pay for reactions that otherwise would not take place“[1]. The key currency of this energy exchange is adenosine triphosphate (ATP), as Lipmann - who had left Germany in 1930 - showed in a seminal paper in 1941[2], in which he coined the term „energy-rich phosphate bonds“ and introduced the squiggle (~P) for their denotation. Some years later, he discovered coenzyme A[3]. This carrier turned out to be the missing link between glyco- and lipolysis and the citric acid cycle that Hans Krebs had discovered in 1937. In form of the thioester acetyl-CoA it provides both the energy and the material to feed two carbon atoms from sugar or fat degradation into the cycle. For good reasons, Lipmann shared the Nobel Prize in Physiology or Medicine with Krebs in 1953. Fourteen years later, when Lipmann lectured in Lindau for the second time, his research focus had long shifted to the mechanisms of peptide and protein synthesis. Already in 1951, he had correctly predicted that the activation of the carboxyl group of amino acids is a decisive step in this process. In 1967, he put this group activation into perspective with new insights on the transcription and translation of the genetic code, admitting that „peptide synthesis as it were actually played only a featured part in protein synthesis“, whose bigger picture called for more than just correct peptide bonds, namely for the correct sequence of amino acids as the necessary condition for the three-dimensional emergence of the correct function. In this context, he introduces transfer-RNA „as one of the most interesting ribonucleic acids that we know“ and reports on current knowledge about what happens at the ribosome. Nevertheless, he spends much of the time of his talk with explaining activation processes. „I’m basically interested in group activation and I have to apologize a bit that I talk so much about it“, he said in his German talk. Despite - or because – of this detour from the title of his lecture, Lipmann’s enthusiasm for his scientific subject must have been contagious for his young audience in Lindau. They had the privilege of listening to a man who had been praised during the Nobel Prize presentation as a successful „fighter“ against the obscurity of complex biochemical processes[4] and who would later be acclaimed for his lifetime achievement: „Few parts of biochemistry were not advanced by the results of his work.“[5]Joachim Pietzsch[1] B. Alberts et al., Molecular Biology of the Cell, Fifth Edition, 2008, Garland Science, New York, USA, p. 78)[2] Lipmann, F. (1941) Metabolic generation and utilization of phosphate bond energy. Adv. Enzymol. 1, 99–162[3] Lipmann F., and Kaplan, N. O. (1946) A common factor in the enzymatic acetylation of sulfanilamide and of choline. J. Biol. Chem. 162, 743–744[4] „Doctor Lipmann. You are a fighter. Your opponent, and everybody knows you have only one, is an impersonal opponent namely the complexity of biochemical processes“, said E. Hammarsten, member of the staff of professors of the Royal Caroline Institute, see http://www.nobelprize.org/nobel_prizes/medicine/laureates/1953/press.html[5] Jencks PW, Wolfenden Richard W. Fritz Albert Lipmann 1899-1986. National Academy of Sciences, Biographical Memoirs, Volume 88, Washington, DC, 2006, p. 19