The Properties of Ion Channels in the Endplate Membrane (German presentation) 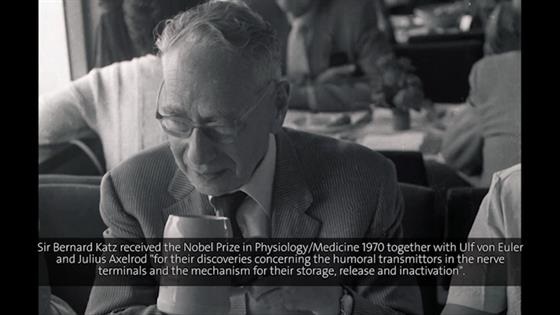 Sir Bernard Katz who shared the Nobel Prize in Physiology or Medicine 1970 with Ulf von Euler and Julius Axelrod participated eight times in the Lindau Nobel Laureate Meetings. "He was always a star on these occasions - many students embarked on careers in neuroscience after hearing him speak."[1] Katz was brought up in Leipzig where he completed his state exams in medicine before he escaped from Nazi Germany to England in 1935. He always remained fond of his Saxonian German accent, however. When listening to this second talk he gave in Lindau, one understands why Katz had a special ability to attract the attention of his audience and to spark their interest for neuroscience: He combines the profound knowledge of a successful research pioneer with an enormous educational skill, and holds a both rigorous, humorous and inspiring lecture.

Whether neural signalling was purely electrical or involved chemical mediators had long been debated – until Henry Dale and Otto Loewi demonstrated the hybrid electrochemical nature of nervous transmission in the 1920s, a fundamental discovery for which they were awarded with the Nobel Prize in Physiology or Medicine in 1936. In the year before, as a young scientist in London, Bernard Katz had begun to study neuromuscular transmission. In the 1940s, working in John Eccles’ lab in Sydney, he showed that the endplate potential in muscle is indeed generated by the action of acetylcholine. Subsequently, he concentrated on the first stage of the neuromuscular transmission process, "namely the mechanism by which arrival of an impulse enables the motor nerve ending to release the transmitter substance"[2]. Using intracellular microelectrodes, Katz and his co-workers discovered miniature endplate potentials (MEPPs) and explained their origin by the quantal hypothesis of transmitter release: "Transmission at a nerve–muscle junction takes place in all-or-none 'quanta' whose sizes are indicated by the spontaneously occurring miniature discharges."[3]

In this lecture, Katz first describes the scientific background and history of these discoveries that earned him a Nobel Prize. Then he moves on to outline the problem that challenges him since eight years: "What happens when acetylcholine reacts with single receptor molecules in the muscular endplate? Is it possible to record the individual synaptic molecular effect as a discrete event and to measure its characteristic time response and intensity?" When he started working on this problem with Ricardo Miledi, Katz says, such a possibility did not exist. Therefore they had chosen an indirect approach by measuring statistical fluctuations during continuous application of acetylcholine. The latter produces not only a measurable depolarization, he explains, but also a measurable excess of voltage noise in the endplate zone and thus allows meaningful insights into the properties and the behavior of acetylcholine ion channels. The results of this fluctuation analysis are remarkable, as Katz shows in many examples, but must be regarded as unproven predictions as long as the statistical deductions cannot be verified in direct observations. Fortunately, Katz finally says, two scientists at the Max-Planck-Institut in Göttingen recently have succeeded in elegantly overcoming this problem. With an introduction of Erwin Neher's and Bert Sakman's patch-clamp-technique and its possibilities, Bernard Katz concludes his lecture, as if he already wanted to introduce the next Nobel Laureates in his field of research. 13 years later, Neher and Sakman were awarded the Nobel Prize in Physiology or Medicine.