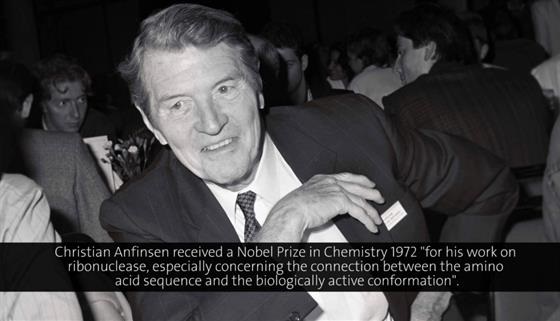 Christian B. Anfinsen is well remembered as a „public scientist in an age of rapid scientific advancement and social change“ [1]. From 1981 until 1989 he was the chairman of the US National Academy of Sciences’ Committee for Human Rights. He was a fervent advocate of basic research. Some weeks before he came to Lindau in 1983, he had publicly critized the Reagan administration’s severe budget cuts to biomedical research programs at the NIH, together with three other Nobel Laureates. At the beginning of this lecture, he draws a connection between excellent research and teaching by expressing his deep gratitude to Kaj Ulrik Linderstrøm-Lang in whose Carlsberg Laboratory in Copenhagen he had spent „the most formative and exciting time in my life professionally“. Linderstrøm-Lang’s Laboratory is regarded to have been „probably the most scientifically exciting environment for a protein chemist“ [2] in the 1950s. Inspired by this teacher, Anfinsen became one of the best protein chemists of his time. In investigations on bovine pancreatic ribonuclease, Anfinsen could demonstrate already in the late 1950s that all information needed to fold up a protein into its three-dimensional structure is encoded within its linear sequence. It was this work that mainly earned him a Nobel Prize in Chemistry, but in this lecture Anfinsen only briefly mentions it. He prefers to talk about a more recent subject of his research, a nuclease of Staphylococcus aureus whose sequence of 149 amino acids he had determined with the help of affinity chromatography in the late 1960s, a success, which played a role in the decision of the Academy, too. The title of his talk is, as he admits, a bit misleading, because peptide synthesis is rather implied than discussed.In affinity chromatography, molecules passing through a column are recognized and caught by molecules attached to that column. This makes it an ideal method to explore, amongst others, immunological interactions, Anfinsen explains, and describes how he applied it to investigate the antigenic properties of small regions (epitopes) of the nuclease molecule (and other proteins). Specifically, he talks under the impression of the „increasing interest in the possibility of making synthetic vaccines“. He also discusses epitope antibodies as a possible diagnostic tool for sickle cell anemia. More generally, he is interested in understanding how smaller pieces of a polypeptide chain gain a native formation in solution and in determining the equilibrium between the native and the random coil structure of a protein. The high hopes that eminent scientists like Anfinsen had in synthetic vaccines 30 years ago have not yet been fulfilled, however. Although more than a thousand of those vaccines have been examined, and many of them have been clinically tested, not a single one has made it to the market yet. [3]Joachim Pietzsch[1] The U.S. National Library of Medicine: Profiles in Science: The Christian B. Anfinsen Papers; http://profiles.nlm.nih.gov/ps/retrieve/Narrative/KK/p-nid/19[2] Schellman JA, Schellman CG. Kaj Ulrik Linderstrøm-Lang (1896-1959).Protein Sci. 1997 May;6(5):1092-100.[3] Van Regenmortel MHV. Synthetic Peptide Vaccines and the Search for Neutralization B Cell Epitopes. The Open Vaccine Journal, 2009, 2, 33-44.