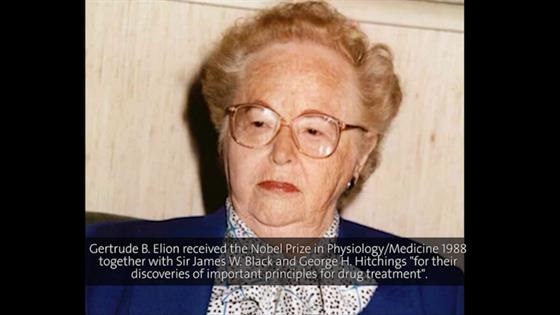 Few scientists who lived in the 20th century have helped to save so many lives as Gertrude Elion. Together with George H. Hitchings she not only discovered and developed the first drug to treat leukemia (6-mercaptopurine), the first immuno-suppressive agent (allopurinol) and the antiviral agent aciclovir. She also co-discovered treatments for malaria, gout and urinary tract infections and blazed the trail for the development of the first effective reverse transcriptase inhibitor to treat AIDS, azidothymidine. Many of the drugs, which Hitchings and she invented, can be found on the WHO’s list of essential medicines.

For good reason Elion and Hitchings shared the Nobel Prize in Physiology or Medicine 1988 with Sir James Black (who invented beta-blockers and H2-antagonists). „The research work carried out by Black, Elion and Hitchings has had a fundamental significance“, the press release of the Nobel Committee stated. „While drug development had earlier mainly been built on chemical modification of natural products they introduced a more rational approach based on the understanding of basic biochemical and physiological processes.“[1] The approach of Hitchings and Elion was rooted in a clever hypothesis: All cells require nucleic acids. Yet tumor cells, bacteria and viruses have a much faster rate of replication than normal cells. It might be possible to take advantage of this differential growth by developing antimetabolites, which selectively inhibit the synthesis of pathogenic nucleic acids without impeding the growth of normal cells. And it was possible, because Elion and Hitchings over many decades relentlessly stuck to their strategy, even if initially little was known about the synthesis of nucleic acids. „Each series of studies was like a mystery story“, Elion later recalled. „We were constantly trying to deduce what the microbiological results meant, with little biochemical information to help us.“[2]

In this lecture, Gertrude Elion describes how around 1970 she became „involved in looking for antiviral agents that would be hopefully selective and not toxic“. Step by step, she discusses three of those agents: aciclovir, ganciclovir and azidothymidine (AZT). She explains that aciclovir targets the viral DNA polymerase and why its acts with such an enormous selectivity: The compound needs to be activated to exert its inhibitory effects, and this requires a specific thymidin kinase, which the virus carries with it but which is not present in unaffected cells. She talks about the problem of the frequent recurrencies of the herpes virus in numerous patients and justifies why aciclovir in this regard has become a prophylactic drug. She introduces ganciclovir as a drug especially well suited for the treatment of cytomegalovirus infections. And finally, in the longest part of her talk, she addresses the challenges that have arisen with the emergence of HIV infections and AIDS. She describes the development of AZT as the first effective AIDS treatment and foreshadows how a triple combination therapy of reverse transciptase inhibitors and protease inhibitors could unleash an unprecented power to contain HIV infections. One week after this lecture in Lindau, the first such combination therapy was introduced at the International AIDS conference in Vancouver. It proved to be a turning point and began to convert HIV/AIDS from a fatal to a chronic disease in many areas of the world.

When Gertrude Elion passed away at the age of 81 in 1999, the New York Times praised her not only for her scientific achievements but also as a role model for female scientists: “Ms. Elion broke down sex barriers in the male-dominated world of scientific research, becoming one of the rare women to win a Nobel Prize and, even rarer, a scientist who did not have a doctorate.“