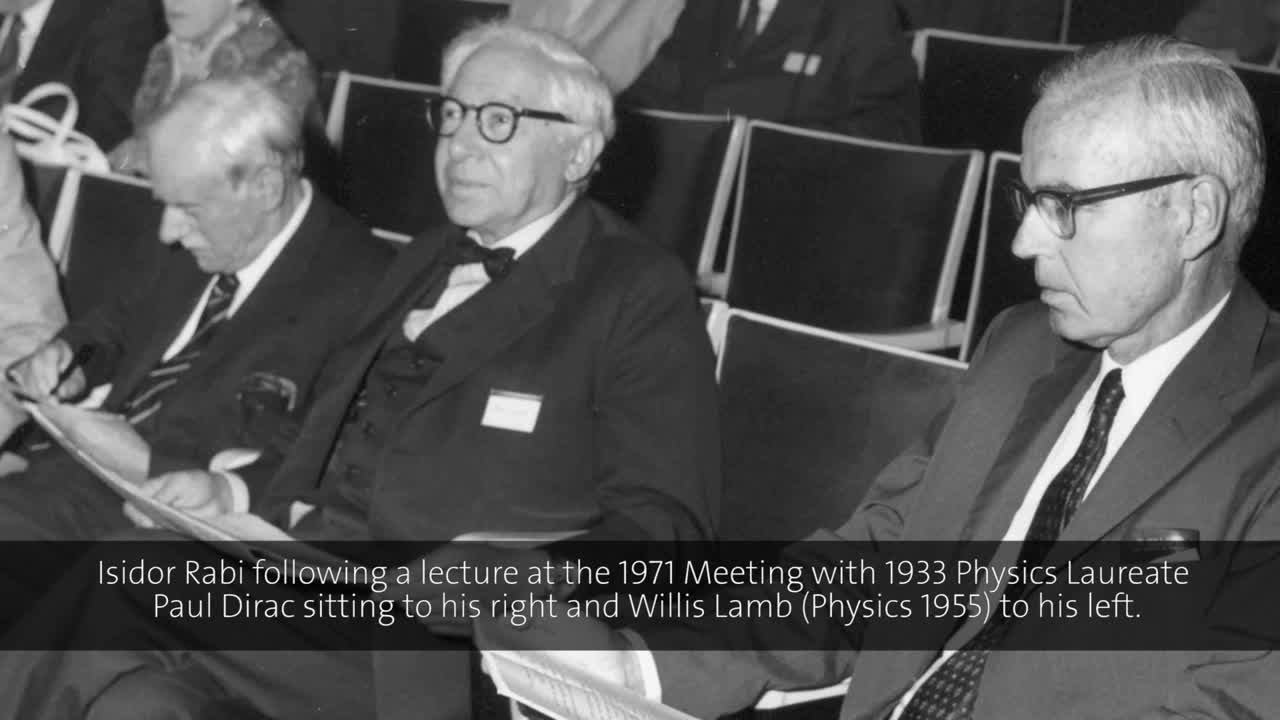 The title and the introduction of this talk refer to an experiment, which the French physicist Louis Dunoyer conducted in 1911. In this experiment, which confirmed an important hypothesis of the kinetic theory of gases, he demonstrated that sodium atoms behave like a stream of particles (and not like a hydrodynamic stream) when they travel through a vacuum. They form a molecular beam that produces a sharp shadow of an obstacle placed in their way. Subsequently, working with molecular beams became a fruitful method of experimental physics. In this lecture, as he admits close to its end, Rabi guides his audience “only half way through the history of molecular beams”, however. Yet this does not diminish the quality of this lecture – quite the contrary! Focusing on praising Otto Stern, who had received the Nobel Prize in Physics 1943, and on describing his own reminiscences as a “wandering American” post-doc in Europe, he composes a colorful personal view of the history of physics in the 1920s.

Rabi’s lecture is a reverence for Otto Stern. “The reason I am giving this talk is to a great degree in remembrance of this very great German physicist, who unfortunately had to leave his country and its culture.” Rabi explains the discovery of space quantization by Otto Stern and Walther Gerlach in their famous experiment in February 1922, in which they sent a molecular beam of silver atoms in a vacuum through a very inhomogeneous magnetic field and realized that the beam was split in two parts. “This experiment more than almost anyone displays for you the miracle of the laws of nature, now we can call it quantum mechanics, that somehow in all this separation occurs”, Rabi says and goes on to give an account of Stern’s further achievements, which laid the foundation not only for the development of nuclear magnetic resonance spectroscopy. Stern’s surprising results for the magnetic moment, for example, “showed that the proton was far from being elementary in the sense that the electron is but must have a structure of some mysterious kind”. Between 1926 and 1933, Otto Stern applied the molecular beams method “to illuminate problems of the most fundamental nature” and published the results in “one of the most brilliant series of papers, which has occurred in the history of experimental physics”, says Rabi, namely Untersuchungen zu Molekularstrahlen in Zeitschrift für Physik. “They go from 1 to 30”, he recalls. “I had the honor being Nr. 12”.

Rabi’s paper was a result of his work as a post-graduate student in Stern’s lab in 1928. “I had some idea of an experiment and Stern invited me to do”. In the year before, he had obtained his Ph.D. at Columbia University. “I had read with tremendous excitement the theoretical papers which were coming out at that time, de Broglie, Heisenberg, Schrödinger, Dirac, and I felt I had to come to Europe which was the source of all this knowledge and inspiration”, Rabi remembers. “In the United States the only people who had read papers of quantum mechanics were the graduate students but none of the professors “. A “small fellowship” gave him the opportunity to study in Europe for two years. It is both interesting and entertaining to listen to Rabi’s description of his two years in Zürich, Munich, Copenhagen, Hamburg and Leipzig, including his encouraging encounters with all the big shots. His lecture vividly evokes the atmosphere of a time when still a “certain sense of brotherhood” existed amongst physicists. His memories depict how easy it once was for a young man who was “not known at all in the centers of learning to come in on his own and join the community”. About his own Nobel Prize winning work, the invention of the magnetic resonance method, Rabi speaks only very briefly in this lecture and presents his research in noble modesty: “I did carry on some of the work that was started by Otto Stern.”