The Function of Prices: Three Aspects of the Theory of Economic Equilibrium 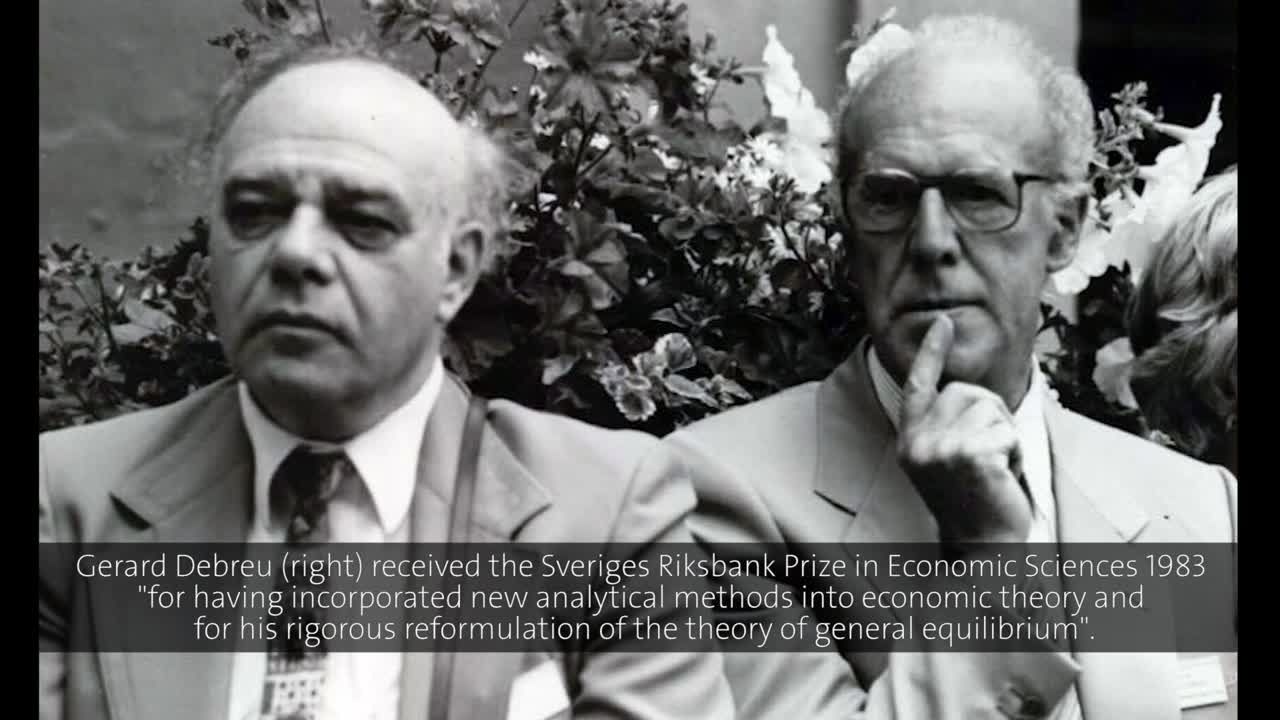 „Giving a lecture on economic theory to an overwhelming majority of chemists may resemble at times a flying trapeze act without a net“, Gerard Debreu introduces his talk, but the clarity and stringency with which he presents his topic enables even non-economists to understand his elaboration quite well.

An economy by definition is made up of a multitude of agents producing, exchanging and consuming a large number of commodities. Amazingly though, in any decentralized market system, the myriad decisions made by these countless agents, which are all motivated by self interest, do not lead to chaos but rather to coordination. According to Adam Smith’s famous metaphor, an „invisible hand“ brings economic actions into an equilibrium, so that in principle one can buy that which one had planned to buy and sell that which one had planned to sell. Smith postulated that prices are the driving forces for this market coordination. In the 1870s, the French economist Léon Walras brought this assumption into mathematical terms and formulated a set of equations, which provided a framework for the investigation of the role of prices. Yet before 1954 it could not be proven that Walras’ equations had a solution at all. In this year, Kenneth Arrow (Prize in Economic Sciences 1972) and Gerard Debreu published their article „Existence of an equilibrium for a competitive economy“.[1] In this article, they outlined a set of conditions „which guarantee that the price mechanism brings about an efficient utilization of resources in accordance with the desires of consumers.“ Drawing on this early work, Debreu later succeeded „in proving the existence of a general equilibrium also under less stringent assumptions“.[2]

The sheer complexity of economic actions and its analysis has „inexorably led to a mathematization which has acquired great momentum during the last four decades“, says Debreu. In his Prize lecture, he had marked the year 1944, when John von Neumann and Oskar von Morgenstern published the first edition of their „Theory of Games and Economic Behavior“ as the „symbolic beginning“ of the „contemporary period“ of mathematical economics. Debreu tries to convey the content of his lecture without too much „intermediate or even advanced mathematics“, however. He just introduces the mathematical structure of vector spaces to discuss the consumption and production of commodities and their relation with prices, a „very rich structure and this is the reason why the application of mathematics to the theory of general economic equilibrium has been so successful“. He uses three simplifying devices to unfold his thoughts: he deals with an economic world in which there are only two commodities; he appeals to geometric considerations and to the figures that illustrate them; and he deals only with exchange economies.[3] Applying these devices, he carefully and step by step explains three functions of prices: Their contribution to the efficiency of resource allocation; to the equality of demand and supply; and to the stability of allocations with respect to coalition formation.

Debreu’s considerations may have reminded his audience that economic studies are as much scientific as chemical ones: „The analysis of the function of prices will exemplify the use of models in economic theories. The immense complexity of economic systems is frequently compounded by major external shocks of a non-economic nature. One can only exceptionally isolate an economic phenomenon and make an experimental study of it under controlled conditions.“