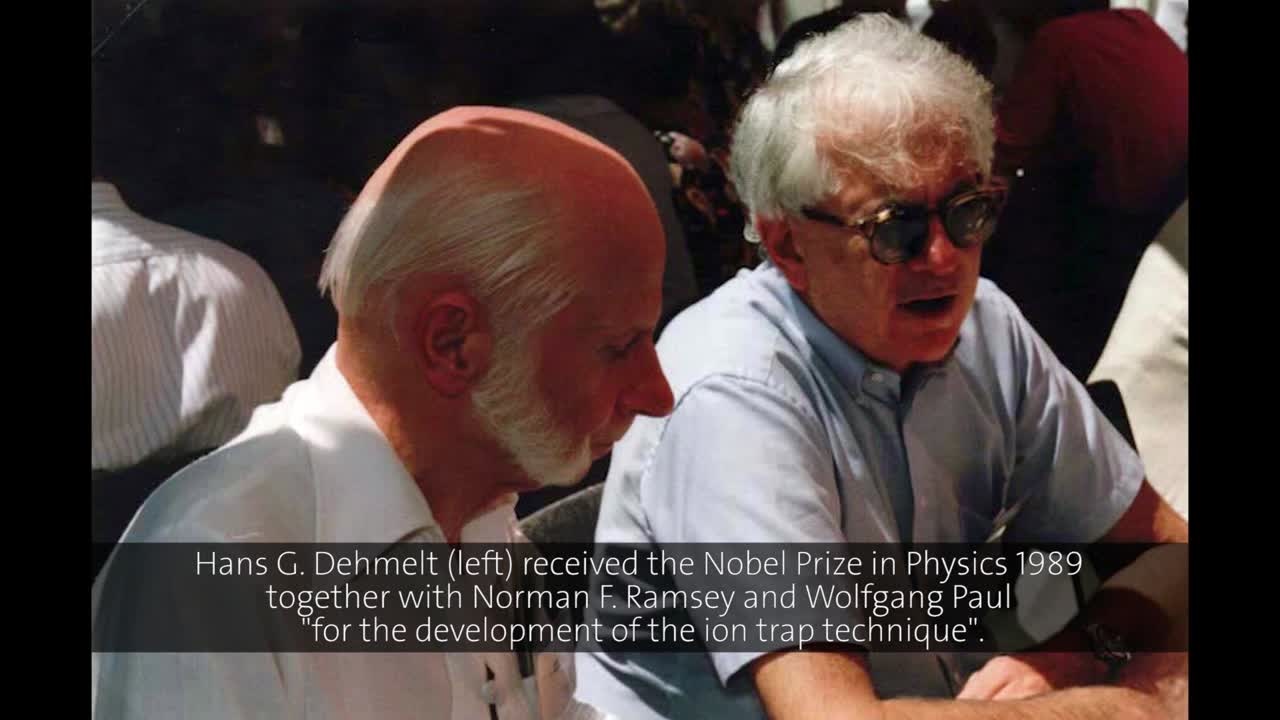 “I fell under the spell of the wonders of the physical world and its universal and immutable laws as a boy of about ten, listening to dinner table lectures by my father on the intricacies, unique wisdom and beauty of Roman law - laws made by mere humans were not the ones to which I wanted to devote my career”, Hans Dehmelt recalled his formative years in this only lecture he ever held in Lindau. Instead of becoming a lawyer, Dehmelt studied physics and according to his own words became “the man who first found a way to catch an electron, bring it to rest in free space for a year and measure its magnetism in order to study its structure”, an achievement for which he shared one of the two Nobel Prizes in Physics 1989 together with his teacher Wolfgang Paul “for the invention of the ion trap technique”.

Illustratively Dehmelt describes the functionality of the Penning trap, which he first built in 1959 by using a homogeneous axial magnetic field and an inhomogeneous quadrupole electric field to confine electrons “pretty much like marbles rolling back and forth in a bowl”. Within this device, electrons may move along a magnetic field line. Whenever they come too close to one of the two negatively charged caps, they are turned around and an oscillatory motion results, whose signals can be detected by a sensitive radio receiver. By giving off the energy of their motion to the antenna circuit of the receiver, the electrons come to a rest. In 1973, Dehmelt and his group succeeded in making this work for a single electron. Three years later, by applying laser techniques, they cooled the electron to such a low temperature that it became possible to study its structure with hitherto unknown accuracy.

Why would one be interested in the structure of an electron, however, if it was nothing but a Dirac point particle with a radius of zero and a gyromagnetic ratio (or electronic g-factor) of exactly two? Because the electron, just like the proton, could be a composite object rather than an indivisible “atomon”, says Dehmelt, and reminds his audience of Otto Stern’s discovery of the magnetic moment of the proton (NP in Physics 1943). “History may well repeat itself. This puts a high premium on precise measurements of the g factor of the electron.” It was known since the 1940s that the g-factor of the electron was not exactly two, but only with the help of Dehmelt’s ion trap technique its precise value could be determined as 2,0023192.[1] This deviation reflects the effects of quantum electrodynamics, but it also provides a hint that the electron may be a composite particle like the proton. “If the electron magnetism is not two exactly, then it is no point, and the more its magnetism deviates from two, the larger is its radius.” Precise measurements of the magnetism of the electron, “may shed a little light on the most important problem of physics today: are electrons and quarks composite particles or not?”.

Drawing on thoughts of Abdus Salam (NP in Physics 1979) who had first proposed such a compositeness, Dehmelt suggests that an electron is composed of three subquarks, which are about ten billion times heavier than an electron, and simply radiate off this huge mass energy excess when they come together to form an electron. Dehmelt hypothesizes that there is no infinite regression of ever heavier and ever smaller particles, but that this regression in nature has only been realized up to the “cosmon”. This would then be the heaviest particle ever to appear in this universe - corresponding to Salam’s “monotheistic particle”. “A cosmon and an anti-cosmon formed the cosmonium world atom from which sprang the universe”.

The cosmon theory and the spontaneous quantum jumps it requires, “is a speculation no more daring than the other speculations in this realm”, says Dehmelt. While he titled his lecture with a line from Goethe’s “Faust”, he concludes it with William Blake’s line “To see a world in a grain of sand”, alluding to a possible parallel: “To see worlds in an electron.”