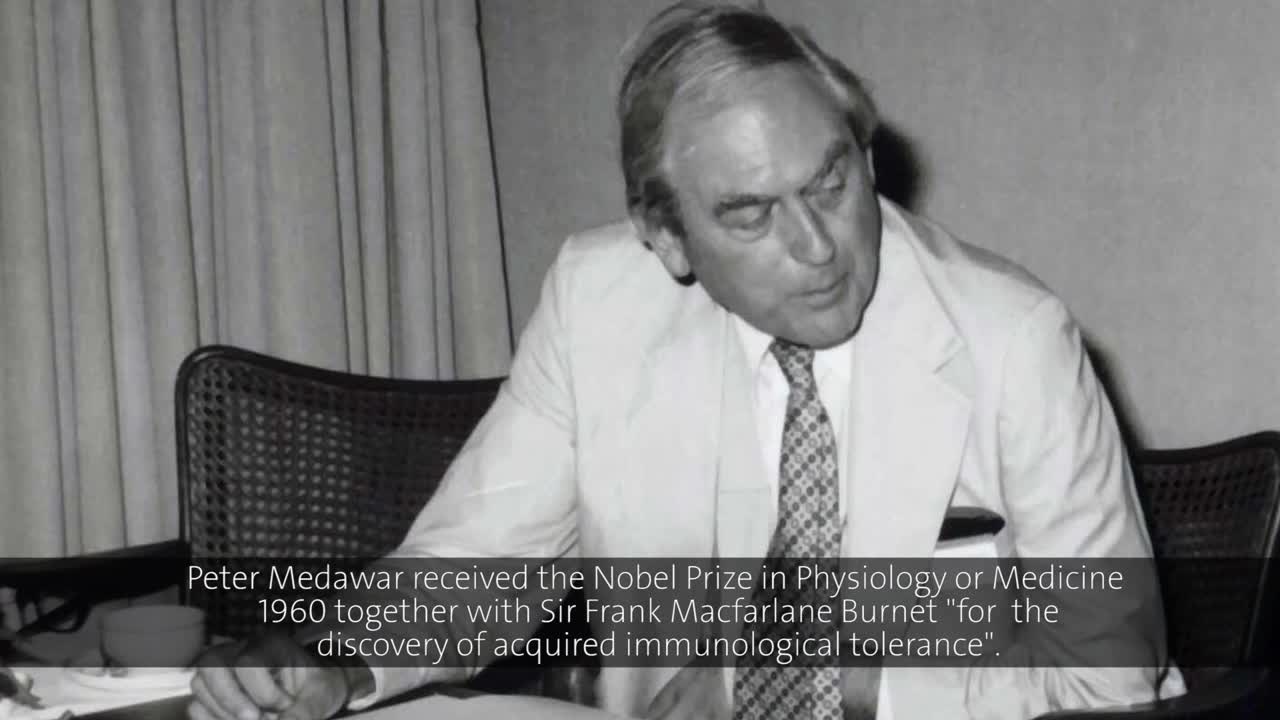 Peter Medawar never accepted the honorary title “father of transplantation[1]”, which many of his peers bestowed on him. He rather emphasized that no bridge led directly from his findings into the realm of modern organ transplantation[2]. Yet he was happy and proud that he had succeeded in proving the feasibility of such a bridge by showing “that organ transplantation between genetically different individuals was theoretically possible”, as he explains in this lecture. “This gave an important boost to moral because until then many people, particularly geneticists, because they are so much wiser than we are, had said that it would never be possible to transplant organs from one individual to another.” So, Medawar literally was a pioneer in the conquest of a hitherto inaccessible field of medicine. He was not on his own, however, as he mentioned in his banquet speech on occasion of the Nobel Prize Ceremony 1960: “I should prefer to remember not the giants upon whose shoulders we stood, but the friends with whom we stood arm in arm. Let me therefore pay tribute to two men who began as my students but who soon became close and dear colleagues in so much of my work: Rupert Billingham and Leslie Brent. And let me also pay tribute to a man whose great synoptic grasp of the fundamental problems of biology has at all times illumined all our thinking: Sir Macfarlane Burnet.”[3] For Medawar, it went without saying to share his Nobel Prize Money with Billingham and Brent.

Medawar started the work that would win him the Nobel Prize in Physiology or Medicine 1960 together with Burnet “for discovery of acquired immunological tolerance”, after he had been classified “D” by the British recruiting board in 1940. “It was my singular good fortune that I was too large to fit either into an aeroplane or a tank”[4], 1.95 m tall Medawar remembered later. Instead of sending him to war, the Government assigned him to support the surgeon Thomas Gibson to find out whether foreign skin could be transplanted to patients with burns. As a result, both discovered the basis of immune rejection, namely “that the destruction of the foreign epidermis was brought about by a mechanism of active immunization”.[5] Ten years later – drawing on fundamental theoretical considerations by Frank Macfarlane Burnet and experimental work by Ray Owen – Medawar and his group demonstrated in experiments with mice and chicken that grafts are not rejected if foreign cells from the future donor are introduced into the future recipient when it is not yet immunologically mature, i.e. during its foetal or neo-natal life. This proof of acquired tolerance[6] “came as a blinding beacon of hope”[7] that the immunological barriers to the transplantation of foreign tissue could be overcome.

Prompted by Medawar’s discovery and spurred by Burnet’s theory of clonal selection, the old chemistry centred immunology was gradually replaced by a “new immunology”, whose most important feature Medawar characterizes in this lecture as “the interpretation of the immunological response in terms of the population dynamics of lymphoid cells”. Elegantly, his lecture captures the essence of immunology’s transformation into a modern science. A “very great lesson” could be learned from that transformation, Medawar says. Immunology’s “snail-like progress” during the first half of the 20th century was due to its self-concept as an applied science. The “new immunology” that quickly became the “most rapidly moving of the biomedical sciences”, in contrast, was initiated by scientists whose main motivation was “to achieve understanding of natural processes and not to solve pressing practical problems on an ad-hoc basis”. Therefore, Medawar advocates basic research with “experiments intended only and primarily to enlarge the understanding”, whereas he criticizes “the modern tendency to treat the financing of research as if research were a branch of the retail trade, as if a customer could order the results that he wanted.”