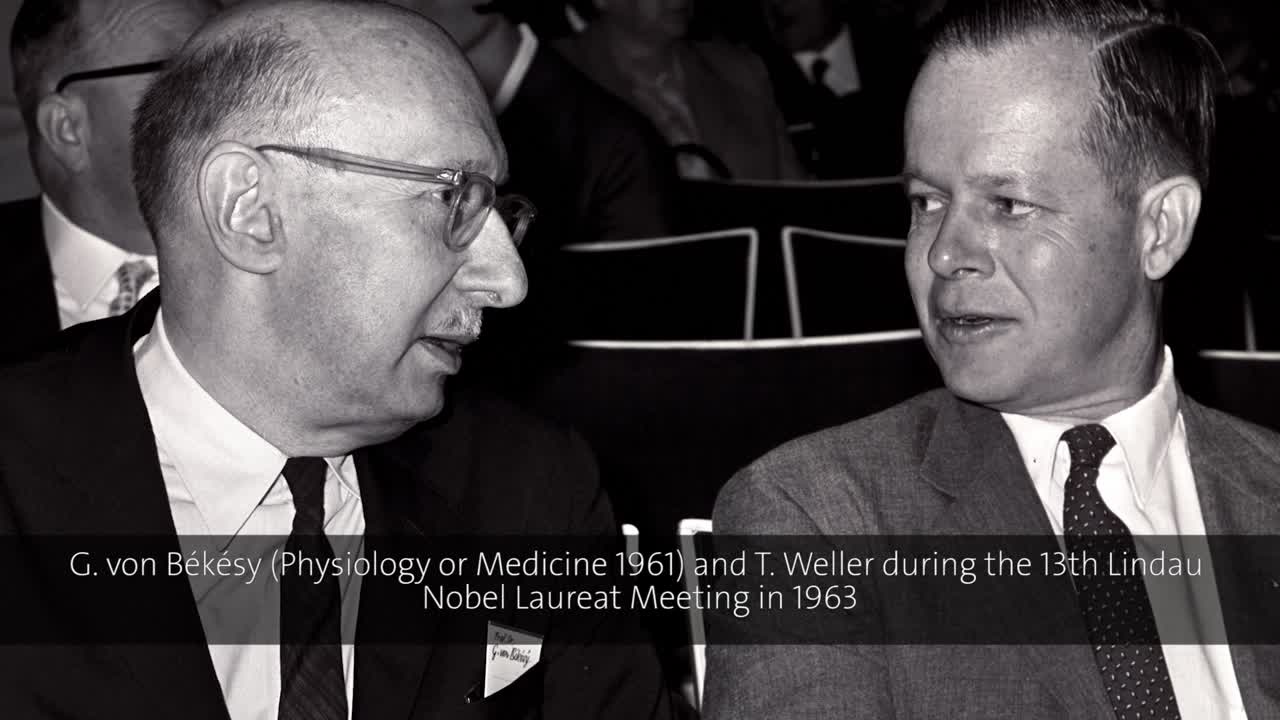 The 28th Lindau Nobel Laureate Meeting was dedicated to Physiology and Medicine. This was Thomas Weller’s fourth meeting at Lindau, and he was to attend ten meetings in all.

“For more than two billion people life is a perpetual state of ill health (...) a daily existence of fevers, fatigue, malaise, hunger, and pain”, Weller stressed during his lecture, further describing the growing inequality between developed and less-developed countries. Weller introduced the Special Programme for Research and Training in Tropical Diseases, which was established in 1974 and sponsored by the World Health Organization (WHO) and the United Nations Development Programme (UNDP). The World Bank joined as a sponsor in 1977 [1]. The programme aims to decrease the incidence rates of a number of diseases through research, but particularly focussed on six diseases in the 1970s: malaria, schistosomiasis, filariasis, trypanosomiasis, leishmaniasis, and leprosy. In his talk, Weller described three tropical illnesses – yaws, smallpox and malaria.

Yaws is a disease caused by the bacterial family Spirochete. An infection manifests itself in the form of skin lesions and without treatment can lead to bone inflammation and disfigurement due to loss of cartilage. Yaws can be easily treated with penicillin, which costs “just a few pennies”, as Weller noted, but the cost of transport of equipment and health workers to affected areas is much higher, hence yaws was still a major health problem at the time.

The summarisation of the global campaign against smallpox was the optimistic high note of the lecture. Thanks to considerable funding and unified international efforts, the last natural case of the disease was reported in Somalia in 1977, a statistic that still stands today [2]. “250 million dollars and a disease has been wiped out”, remarked Weller, but he also added that from an epidemiologic perspective, the eradication of the virus was relatively straightforward. It is much more complex to curb the incidence rate of malaria and Weller dedicated a significant part of his lecture to the various pitfalls of preventing malaria, such as resistance of mosquitoes to insecticides, and decreases in funding after programme failures. Forty years have passed since Weller’s lecture, and fortunately there are some triumphs in the crusade against tropical diseases. At present, yaws is endemic in 15 countries and its eradication is underway [3]. Trypanosomiasis and leprosy may also soon be illnesses of the past [4, 5]. Malaria, however, continues to be the misfortune of developing countries, and the problems mentioned by Weller still persist today. Although deaths from malaria have decreased by approximately 50% in the last decade, the disease accounts for about half a million deaths worldwide in a single year [6]. In his autobiography, “Growing Pathogens in Tissue Cultures: Fifty Years in Academic Tropical Medicine, Pediatrics, and Virology”, Weller described his summer fellowship during medical school in 1938, when he studied malaria and the public health system in the southern United States. Nearly one million people were infected with the disease [7]. By 1949, malaria was eradicated in the United States [8].