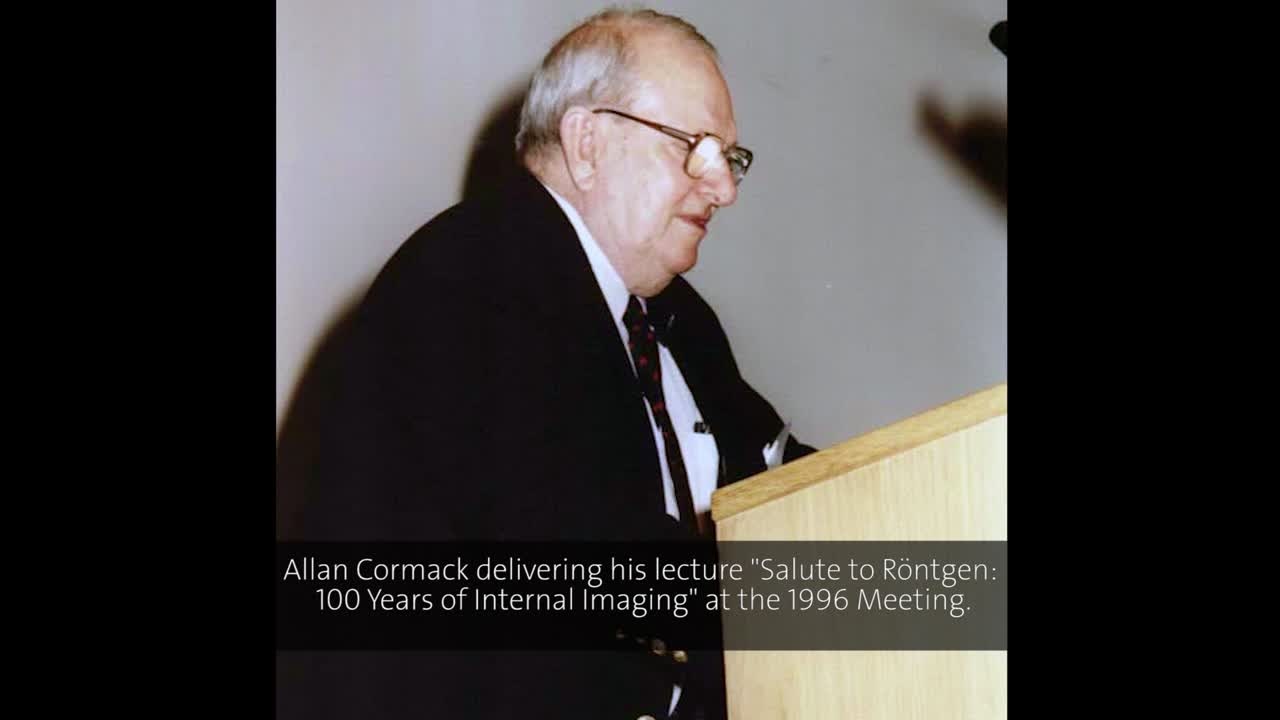 Allan Cormack attended the Lindau Nobel Laureate Meetings six times. The title of this last lecture he gave in Lindau suggested itself, because the centenary of Wilhelm Conrad Röntgen’s discovery of x-rays had just been celebrated in the year before. And yet the title is misleading, because Cormack chooses to talk rather about the development of computer-assisted tomography than about the achievements of the winner of the first Nobel Prize in Physics. Nevertheless he emphasizes that “we must never forget that the discovery of x-rays was the first step in the replacement of classical physics by what is now called modern physics”.

The starting point of Cormack’s lecture is the famous x-ray picture, which Röntgen made of the right hand of his wife on December 22nd, 1895. This picture undoubtedly shows much detail. Yet if the hand had been rotated by 90 degrees, the images of all fingers would have been superposed and produced a confused picture, Cormack says: ”I suggest that the necessity of producing images of slices through the body must have been obvious right from the year 1895 on.”

Attempts to solve the problem by means of mechanical tomography, first made around 1920, where the x-ray tube and film are moved together did not yield satisfactory results, however. A nuclear physicist by training, Cormack became aware of this problem accidentally in 1956, when he was asked by the Groote Schuur Hospital in Cape Town to work as the hospital physicist in the radiotherapy department for one and a half days a week because then “I was the only person in Cape Town and probably in South Africa who knew how to handle radioactive isotopes”. He witnessed that physicians were planning radiotherapies as if they were delivering radiation to a homogenous medium, neglecting the fact that all tissues absorb x-rays very differently. Shouldn’t it be possible to plan treatments properly by using some kind of maps of absorption of x-rays by the various tissues of the body? If one knew the mean values of the x-rays’ absorption along a number of straight lines through the body, could one then find a mathematical function to describe how x-rays attenuate in each part of specific planes? Yes, one can, as Cormack demonstrated in a paper he published in 1963[1]. With only three requests for a reprint, the interest in this publication was disappointingly low, though, and Cormack „almost forgot the whole matter“, until around 1970 he „started hearing about a machine developed by Hounsfield in England, called the EMI scanner, which did in the clinic what I was hoping my device would have done when reduced to a practical form”.

In fact, it was Godfrey Hounsfield who constructed the first computed tomography system practicable in medical care, unaware of Cormack’s more theoretical work, who in turn, as he also describes in this lecture, was unaware of foundations laid by the Austrian mathematician Johann Radon already in the 1930s. Yet according to the Nobel assembly at the Karolinska Institute, Cormack was the first „to state the principles for reconstructing a cross-section of tissues in an organ based on these X-ray projections. The reason Cormack's discovery did not come to be industrially applied is not known, but it can be assumed that the computers of the time lacked sufficient capacity to enable the method to be applicable to medical care.[2]

In this lecture, Cormack also mentions possible applications of tomographic methods in anthropology, astronomy and geography and briefly introduces positron emission tomography and magnetic resonance imaging. Coming back to the title of his lecture, he concludes: „I end simply by saying that the revolution in imaging which Röntgen started is still vigorously going on”.

[1]
Cormack, AM. Representation of a function by its line integrals, with some radiological applications. Journal of Applied Physics, Volume 34, 9, p. 2722-2727.